When a union campaign worker knocked on Michael Perry’s door in North Philadelphia on a recent afternoon, the 40-year-old seemed disinterested.

But when organizer Timothy Freeman of Unite Here asked if anyone in the house was looking for a job, Perry’s mood shifted.

“I actually do know a few people who need some jobs,” said Perry, who runs his own trucking business and doesn’t identify as a Democrat or Republican.

Freeman shared a QR code with Perry that led to a sign-up page for the labor union’s hospitality worker training program—and the guarantees of placement in a union job.

Only then did Freeman urge Perry to vote for two Democrats in the upcoming election—John Fetterman for US Senate, in his midterm race against TV personality and surgeon Mehmet Oz; and state Attorney General Josh Shapiro, who is running for governor against state Sen. Doug Mastriano.

The Philadelphia campaign of Unite Here reflects the broader strategy of organized labor in 2022, channeling precious cash to elect Democrats in competitive races and, at the same time, rebuild their ranks depleted by pandemic layoffs.

“We see an opportunity to win politically when we educate our members and our communities across the country about how this administration is really the strongest administration we’ve ever had,” said Lee Saunders, AFSCME president and chair of the AFL-CIO political committee. “And we’re doing it through taking advantage of those organizing campaigns and bringing new members into the fold.”

‘Way to Fight Back’

Unite Here has dispatched nearly 1,200 volunteers in the swing states of Pennsylvania, Arizona, and Nevada to help Democrats hang onto their razor-thin advantage in the Senate, calling it the largest grassroots canvassing program on the ground in those states.

The two-pronged model is most palpable among service-sector unions like Unite Here, but is also being embraced by the AFL-CIO, the nation’s largest labor federation. The group this month announced a voter mobilization effort featuring more than 10,000 volunteers, aimed at reaching 7.7 million people who aren’t union members but share similar values to organized labor.

Unite Here’s political program, called Workers to the Front, emulates the strategy used by the union to organize workplaces, discussing big-tent issues like abortion and crime in addition to workplace issues. 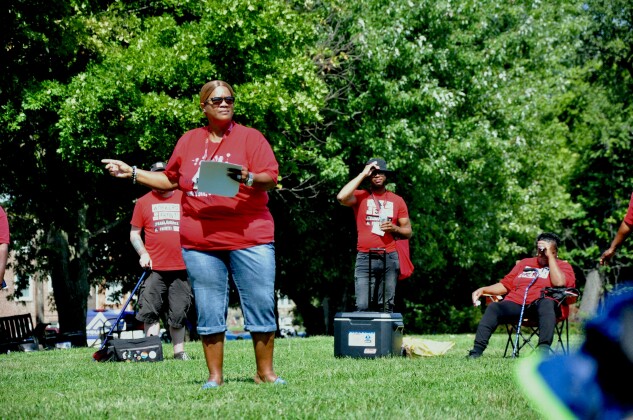 A member of Unite Here’s Workers to the Front prepares volunteers to canvass in Philadelphia, Pa., on Aug. 31, 2022.

Union leaders insist it’s working. Unite Here in 2020 turned out 125,000 Democratic voters in Nevada, Arizona, and Pennsylvania that hadn’t voted in 2016, it says.

In Nevada and Arizona, the number of these voters exceeded the margin of victory for Biden: 42,411 and 48,364, respectively. And in Pennsylvania, working-class neighborhoods like the one where Freeman canvassed pushed Biden to victory, according to exit polls.

Residents of Perry’s neighborhood weathered their share of hardship even before the pandemic. In some areas, half of households fall below the poverty line, compared to less than a quarter in Philadelphia County as a whole. Median household income in the poorest zip code is $37,000, compared to $64,000,000 for all of Pennsylvania. And at least a quarter of residents work service jobs.

Most of these residents are Black and Latino. More than half knew someone who died of Covid-19, according to Pew Charitable Trusts.

Public services are scarce in this part of town. At Unite Here’s staging area in Tacony Creek Park there wasn’t a picnic table, trash can, or water fountain in sight at the event late last month. Some volunteers brought folding chairs while others sat on a lawn speckled with weeds and crabgrass.

“More and more people are seeing unions as a way to fight back,” said Rosslyn Wuchinich, president of Unite Here Local 274.

The strategy coincides with a convergence of favorable factors for the labor movement. Despite mass layoffs winnowing ranks at the start of the pandemic, low-wage workers are back and organizing in droves. Union public favorability is at a historic high. And the White House is unabashedly pro-labor.

From October 2021 to June 2022, union representation petitions filed at the National Labor Relations Board increased 58% compared to the same time over the previous year. By May 25, fiscal year 2022 petitions exceeded the total number of petitions filed in all of fiscal 2021.

And 71% of Americans approve of labor unions, up from 64% before the pandemic—and the highest recorded in more than half a century—according to a Gallup poll released at the end of August.

Republicans, however, highlight staggering inflation that has soured the national mood and provided a clear alternative to voters.

Unions also have the tricky task of defending , a steadfast ally who has supported many of their policies, at a time when less than half the electorate approves of his performance. And they’re up against the historical trend of a first-term president’s party taking deep losses, a threat made more potent by economic whiplash at the pumps and the ports.

And nearly 30% of Unite Here’s membership—about 90,000 workers—never returned after hotels, casinos, and restaurants shut down during the pandemic’s first wave, according to federal disclosures.

The union said it organized 15,000 new workers in 77 workplaces since the pandemic began, which it sees as a harbinger for potential growth.

“This is definitely a hot moment to organize,” said Gwen Mills, secretary-treasurer of Unite Here, who is also leading the union’s political program. “I don’t think it will last forever, which is why we’re doing everything we can to seize the moment now.”

Unions say it’s not just about the timing, but defending the pro-labor policies enacted by the Biden administration and Democrats in Congress.

Because Democrats hold a slim majority in Congress many of their labor policy wins have been enacted via provisions in legislation incentivizing companies who want clean energy tax credits to participate in typically union-led registered apprenticeships, or by adding prevailing wage requirements onto grants for certain construction projects.

Biden has also issued executive actions supported by unions like requiring the use of project labor agreements on large federal construction contracts, which guarantee a contractor will enter into a collective bargaining pact for the project.

But, without Democrats in power, those efforts may not have staying power. Republicans are loathe to support labor-friendly language in federal investment. And while the Department of Labor and the National Labor Relations Board can enact some changes through regulations—and Biden can do so through executive actions—such policies can be easily reversed by another administration.

“That’s why this election is so important,” said Saunders, who is on the AFL-CIO political committee. “There is an energy out there. People understand that they’ve got to have a seat at the table. And this is the time to do it.” 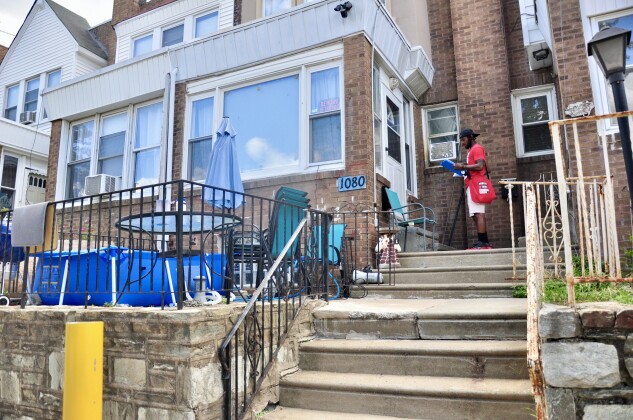 Timothy Freeman knocks on a door in North Philadelphia ahead of the midterm elections.

Two years ago, unions were hamstrung by the pandemic. While some volunteers still canvassed neighborhoods before the 2020 elections, Covid restrictions limited their interactions.

“We were being extremely careful,” said Marc Perrone, president of the United Food and Commercial Workers. “Everybody was masked, they had hand sanitizer with them. They also had face shields. And they weren’t going into houses.”

In 2016, UFCW began to notice that members were less than eager to be told how to vote, Perrone said. Instead, workers at his union and others simply wanted information to make their own ballot-box decision.

That lesson was on display with the Unite Here canvassers in Philadelphia, who led every conversation with general discussions about voting and jobs. Aicha Tahirou, a hotel housekeeper, went door to door and began by asking whether the person had requested a mail-in ballot, an aspect that boosted Democratic turnout and helped seal Biden’s victory in 2020.

As several people filled out forms for a mail ballot at the doorway, Tahirou brought up weightier issues, such as the recent Supreme Court decision that reversed federal abortion rights. Jahmeer Shelton, 20, registered and said he would vote for the first time.

Perry, the business owner, said he wasn’t “too enthusiastic about the current regime,” citing concerns with issues that have been “pushed to the backburner,” like the George Floyd Justice in Policing Act, which was stalled in the Senate last year.

Freeman, who was wearing a bright red Unite Here shirt, wasn’t phased. He smiled and told Perry that he would be back to the neighborhood before the Nov. 8 election.

The regional banks have low cost deposits and margins that will improve, says RBC's Cassidy