International Recycling Group, which plans to build a $185 million plant at the former Hammermill Paper Co. site in Erie to transform waste plastic into raw materials for the plastics industry, is only one of the players in the business of plastics recycling.

While IRG moves ahead with its plans to build a new facility that it predicts will be the largest in the world, a Meadville company already is recycling hundreds of millions of pounds of plastics each year and using it to manufacture its own products.

And according to the company, its manufacturing process is environmentally friendly. No glue, binders or hazardous materials are used to make the products, and there are no exhaust fumes or wastewater. Water redirected by HydroBlox materials showed undetectable amounts of all 184 chemicals sought in aggregate quality testing.

“We use plastic that typically would be headed to a landfill if we didn’t take it. And we use it to make a product that is better, cheaper and faster than anything else out there. It stands on its own.” Grieser said. 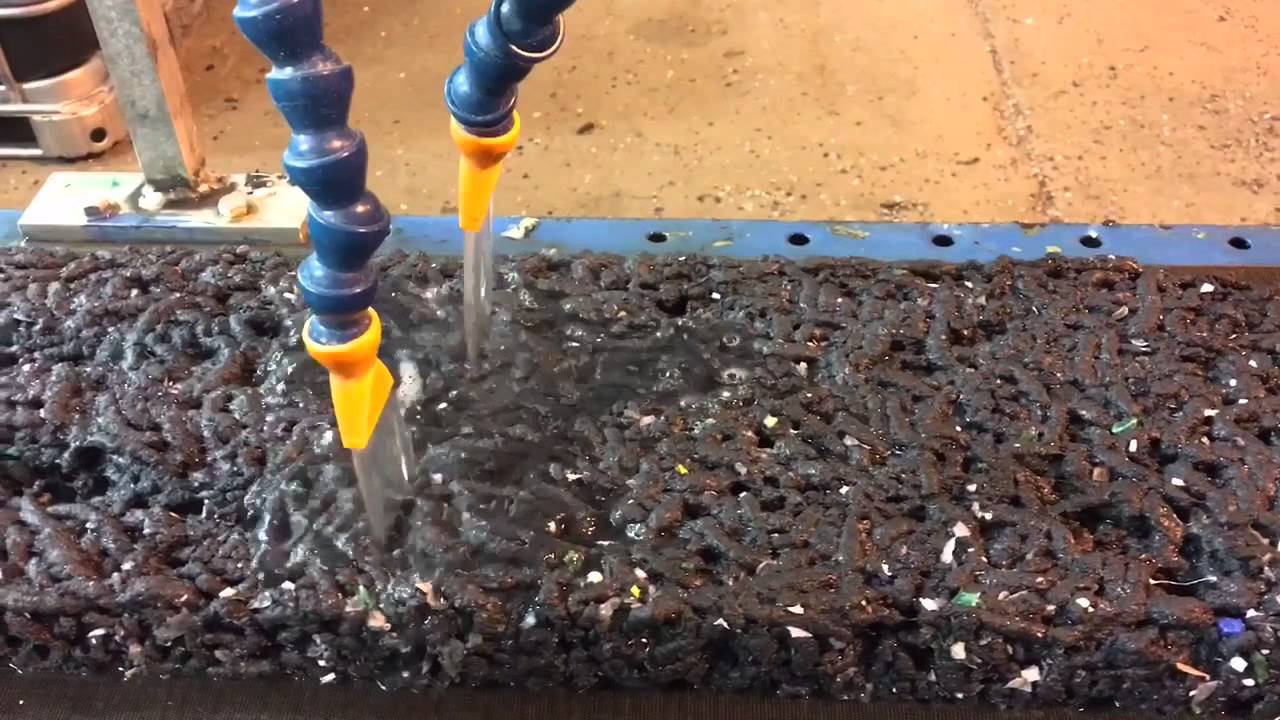 Plastic from around the globe

The company’s 126,000-square-foot processing and manufacturing facility in Meadville accepts plastic from around the world — from packaging shipped from Germany and Canada, to boat wrap provided by marinas and even kayaks discarded by a Pittsburgh-area rental company — and grinds it to make lightweight, permeable blocks, planks, boxes and noodles to catch and redirect water.

HydroBlox planks are used beneath roads worldwide, including roads maintained by Highways England, the national highway department for England.

“Highway departments are going to permeable pavement, which is great. But they need something beneath that to allow water to keep moving,” Grieser said.

HydroBlox products move more than 14 gallons of water per minute per meter.

“That’s faster even than sand on a beach can move water,” Grieser said.

HydroBlox systems redirect stormwater while catching sediment that otherwise would be carried into waterways. Openings, or perforations, in the material are smaller than the sediment particles.

“The materials won’t crush and water shoots right through it,” Grieser said.

HydroBlox products are used in both large-scale and backyard projects.

At a CSX railroad switchyard in Florida that flooded regularly for more than 50 years, crews installed HydroBlox to keep it dry.

“Everything else they’d tried through the years to keep it dry failed within a month. With HydroBlox, there’s been no more flooding, and it was installed five years ago,” Grieser said.

“Treatment plants can be swamped after heavy or prolonged rains and have to release the water and even sanitary sewer flows into a lake, for instance, or streams,” Grieser said. “We can put filter boxes in so that the plants aren’t overloaded with stormwater.”

A multimillion-dollar home in Dallas repeatedly flooded until HydroPlanks were installed near its foundation, Grieser said.

“They’d have an inch of water in the living room and kitchen after even light rains,” Grieser said. “Now, no more water.”

How HydroBlox has been helping in areas close to home

And with installation as easy as digging a shallow trench and laying and covering HydroBlox materials, cost is low compared to more traditional drainage systems. The drainage system for a Tesla-built utility-grade solar farm in Maryland was projected to cost $2.1 million. Using HydroBlox instead, the project cost $685,000 and was completed in two weeks rather than the estimated three months, Grieser said.

The company additionally uses the plastics it recycles to make green roofing. The systems grow medical marijuana and other plants without soil in as little as eight weeks.

A new HydroBlox product can be used in construction in place of concrete cinder blocks. “Our blocks are eight times stronger,” Grieser said.

With products and markets expanding, the amount of plastic that the company accepts and recycles is also growing.

“Over the last five years we’ve moved from taking in thousands of pounds of plastic to hundreds of millions of pounds,” Grieser said. “I just ordered another three-quarters of a billion pounds for next year.”

‘It’s been quite a ride’

Founded 14 years ago in Pittsburgh, HydroBlox has facilities in Meadville and Conneaut Lake and employs 10 people in Crawford County. Three more plants are scheduled to come online in 2023 in Michigan, Florida and the Baltimore area.

“I was thrown out of every bank, every venture capital firm east of the Mississippi,” Grieser said. “First of all because the product isn’t sexy, and in fact is ugly. Second, because I said I wanted to recycle plastic to make it. They all just kind of looked at me.”

“I have five kids, so my thinking when I started this was like NASA’s — failure is not an option,” Grieser said. “I built the business by going to the people responsible for roads, railroads, athletic fields and major amusement parks and showing them what the product can do.

HydroBlox has been named one of the top mechanical recycling companies in the world by the U.S. Chamber of Commerce.

The company’s plant at 200 Mercer Street in Meadville is an expansion of a more-than-century-old Westinghouse building. The main facility near French Creek is a quarter-mile long from front to back and was purchased from Seco-Warrick. HydroBlox has been in operation in the building since February 2021.

The company hosted monthly collections of plastic from the public until this summer.

“We said we would take any plastic but PVC pipe,” because of its high chlorine content. “It went really well for about six months,” Grieser said. “All people had to do was drive in, and we had people take plastics right out of their cars.”

But then people put garbage, metals and even microwave ovens in black bags that they took to the site. For now, at least, there are no more public collections, and Grieser is still “looking for a home” for skids of metals and other non-plastic recyclables left at the plant.